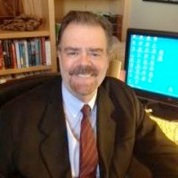 The man in the photo is my 8th grade English teacher……. 44 years later! I reconnected with Michael Fronk a year ago at an executive career transition group we both support. We have had several great conversations since, and Mike has generously agreed to let me share his story. His is an increasingly common preference these days; moving from a bigger to a smaller company some time in the second half of one’s career. I often compare the corporate employee to entrepreneur transition to the adjustments that would need to take place if a domestic pet was told that he or she now needs to become a wild animal. Mike really likes that metaphor. To follow are some of the highlights from our conversation last month.

You’ve owned a small business for 10 years now, but you spent nearly three decades at General Mills and Land O Lakes. What’s the biggest difference between running a small vs. large business?

“I did some “bucket list” kinds of things, including some adventurous traveling and serious writing. Then I took up consulting for a good part of the next four years.”

You were 60 when you decided to buy Network Business Computing. What were you thinking?

“My son had received a degree in computer network engineering, and asked me to

help him start a business in this field.”

How was the first year?

“After two months of owning the company, my mother died and I needed to go to Florida and take care of her estate. That took me six months to complete, and I thought I could mostly let others run the business in my absence. The debt grew fast, and the revenues didn’t keep up. I had a big hole to dig out of when I returned. I learned the hard way that when you move to ownership of a small company, you must make it the passionate be-all-and-end-all object of your regard.”

The best aspect of running a small business?

“You can make a huge improvement in a few lives. Plus, I have been able to work with my son for ten years, and that has been a great opportunity!”