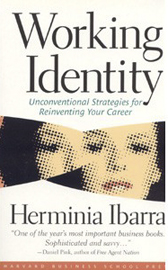 If you start to dream of a big shift in your career and/or life direction, I have the perfect book for you: Working Identity, by Herminia Ibarra. This book begins by offering great advice and case studies that illustrate how one makes a big shift by starting with small experiments, shifting to new connections and then eventually making sense of what has been learned.

When the book came out in 2003, it was a game changer in the career transition industry. It has the credibility of the Harvard Business Press, and has been universally praised for its simple, straightforward and effective model and its great stories. I highly recommend the book, and encourage you to consider how you might benefit from Ibarra’s three step process if a big change is in your future.

Making Sense
Developing stories that explain who you’re becoming in light of these new activities and new relationships. Deciding to sharpen your focus and commit or circle back and regroup.

Is it too late for you to run away and join the circus? Herminia Ibarra would say probably not, but she would also suggest proceeding with caution by starting with small steps, having lots of conversations with successful “circus” performers, and then decide later, after enough experiments, conversations and reflection have taken place. If you are interested in expanding your options, read on to the next section below about career alternatives. More satisfying possibilities might be just around the corner. Is the circus calling?