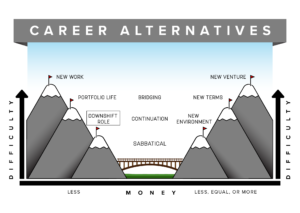 This is the fourth in a series about nine clients and friends who successfully transitioned or transformed their careers after age 50. This month I will describe how a former client downshifted two levels in her early 50s.

The graphic above illustrates the degree of difficulty and the economic considerations for a downshift role option. This career alternative involves moving from your most recent role to a lower level of responsibility and/or lower title.

It was a Wednesday afternoon a few years back when I got the call. My client sounded anxious and deflated. The hiring manager had just informed her that while she might be a great candidate for the job, there was serious concern that she was overqualified.

They would get back to her Friday after considering her candidacy a few more days. Her job campaign had gone on for several months, and she was more than ready to get back to work. Here were my questions to her that afternoon.

Was this a good job?

The job was at a lower level than her previous position, and there is always a question of how challenging and engaging a job will be if it is one or two levels below the last one. Would she be frustrated or leave if not sufficiently challenged? Would she be more qualified than her boss and become a possible threat or annoyance? Would she be excited about going to this work each day, especially after the initial enthusiasm wore off? Would her skills and knowledge fit the new role?

When I asked her these questions about the job, she told me it would be very engaging and challenging, despite its lower level. I heard in both her words and tone that she was excited about the growth and challenge ahead. She could do this job with her skills, knowledge and ability to adapt and learn. She was ready to go for it.

Was this a good organization and boss fit?

This was a premier company with an excellent reputation for work environment and corporate culture. It was fast paced and challenging, but did not seem to be a “burnout”environment. The boss was known to her, and she anticipated an excellent working relationship.

Was this a good fit personally (salary, location, hours)?

While the salary was lower than her last job, it was fair and logical for its level and the industry. She could make this salary work for her family. The location was a major city in California, and having close relatives nearby was a big plus for her. The cost of living was higher, but she and her family could make this work. The hours and demands would be draining at times, but no more so than she was used to.

If you answered yes to all three questions, why not call them now?

I was concerned that waiting until Friday could send the message that she too was hesitant about the job, had her own concerns about being overqualified, and might be wavering on the decision. Why not call the hiring manager today and preempt their “overqualified” concerns?

She made the call that same day, emphasizing her fit in each of the areas described above, and received a job offer the next day.

Could this be a strategy and script for you?

If you find yourself in a similar situation, and feel you are likely being judged as overqualified, go over the three questions above first. If you can answer each in the affirmative, consider telling the employer something like this:

“You may have some concern that I am overqualified for this position, but let me assure you that his job would be very engaging and challenging. With my considerable experience to draw from and a proven ability to adapt to new challenges, I would do an excellent job for you, and really enjoy this work.”

(If a relocation) “My family and I have had numerous discussions and have done our homework regarding this relocation. We are ready to move, and are looking forward to it.”

($) “While the compensation will be less than my last job, I am confident that you will be fair and logical in your negotiations. If your offer is consistent with the nature and scope of the job, the market, and where I logically fit on your range, I am confident that we can make this work.”

“This all lines up nicely with what I had hoped for in my next position and organization. I believe I’ll not only be a great fit here, but will also be a significant contributor to the success of this company. I’m very excited about joining (company name) and doing this work!”

If an “overqualified” label could diminish or eliminate your candidacy for a job, I hope these suggestions help. Prior to its release, I shared this blog with my former client. She approved its content, and added these three comments:

“I gave evidence of my adaptability through an example of a time in my career where I needed to get up to speed quickly in a new role and demonstrate significant leadership due to lack of credibility in the former leader.

I recall that the discussion on starting salary was tricky. I told them that, to me, rewards had always followed my performance and that while I expected to be paid fairly and competitively, initially replacing my salary was less important to me than meaningful work, great colleagues and an opportunity to develop new skills. That seemed to resonate. It also happened to be true!

As I reflect on that period in my life, I believe I was driven more by a need to really reinvent myself than anything else. I would not make different decision as to relocation but do know I underestimated how difficult it would be making a significant change in industry (especially to high tech). Nevertheless, I believe I was successful in the transition and landed on my feet.”

From Corporate Executive to First Time Entrepreneur at 60 Career Crossroads after 50… Will a Portfolio Life Become Your Second...
Scroll to top