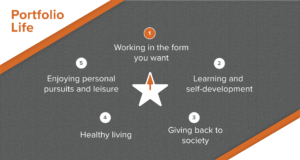 This month is part two of a six part series about life and work after age sixty. This series is for those who want to create a thoughtfully crafted future that is best described as a portfolio life. The five elements of a portfolio life include working in the form you want, learning and self-development, giving back, healthy living, and enjoying personal pursuits and leisure.

In this month’s blog, I will be describing the first element of a portfolio life. Stories from my father-in-law, Jack Hill, and my father, George Dow Sr., illustrate how to work in the form you want after age 60. You can also learn about nine distinct career options by reading my 2018 blog series, “Career Crossroads After 50.”

Jack was an exceptional mechanical and electrical engineer. He was also a pioneer in the computer industry. Over his career, Jack worked in both large and small manufacturing businesses. He preferred the more nimble, less political, small businesses during the second half of his career. By his mid 50’s, Jack had risen to Vice President of Engineering at Ramsey Engineering, a small manufacturing business in St. Paul, Minnesota.

Jack once shared with me that being a Vice President was not as satisfying, or as good a fit, as his previous roles in engineering. He had worked very hard to earn that Vice President title, was highly compensated, and a loyal and productive leader.

Ramsey Engineering was a very successful company, but shortly after Jack turned 57, the company experienced a deep revenue drop. Some personnel changes were needed to cut costs, and Jack with his high salary was a target. There was a good chance that Jack’s job was going to be eliminated, and he needed to do some quick thinking to avoid that fate.

The proposal Jack made to the board during this difficult period was brilliant. Jack told the board, “I’ll shift my title to engineer and project manager, and work half time, thus cutting my salary in half. I will return to engineering and help solve the toughest customer problems at Ramsey.” Jack’s proposal was accepted by the board, thus beginning a ten year period that turned into Jack’s most satisfying and productive of his career.

In the first five years in his new role, senior managers would smile and say, “We got a great deal with Jack. We pay him as a half time employee, but we know he thinks about the company all the time.” That observation was true the first five years, because Jack needed to spend considerable time getting back up to speed as an engineer. In his last five years, however, between age 62 and 67, Jack was able to hold true to his half time work schedule. He was bridging to retirement by taking on volunteer roles and adding more travel and leisure to the other half of his schedule.

Jack often described these last ten professional years as, “My perfect bridge to retirement.” He lived to age 99. In his early 90s, Jack was still very productive in his volunteer work for the Service Core of Retired Executives (SCORE) two days a week, and reading for the blind two mornings a week. Needless to say, Jack is an inspirational role model!

My father was a sales representative for Deluxe Check Printers (now Deluxe Corporation) for 38 years. He loved his job and was dearly loved by his co-workers and customers. George retained the coveted Twin Cities sales territory for all those years. When he turned 65, George was told that he had to retire in order to move younger, ambitious, sales reps into his highly attractive territory. He was devastated. My father did not want to retire, but was given no choice.

When George became progressively bored and restless at home during his first six months of retirement, he realized he had to turn off the TV and get out of the house. He started to visit his former customers at the banks. George asked about how Deluxe was treating the bankers and tellers after his departure? They had positive things to say about Deluxe, but also told George about a competitor of Deluxe who was offering bank forms at a very good price.

George was intrigued. He asked about the quality of the products and the competitor’s sales rep. The response was, “The price and quality are great, but the sales rep is the owner, and he is no George Dow.” They wanted their good friend George back, and perhaps this could be a way to make that happen. If he was employed by the new bank form company, George could once again make the bankers and tellers smile, laugh, and buy from him, as they had happily done for 38 years.

Shortly after that encounter at the bank, George met with the owner of the bank form company. He told the owner, “I can definitely sell your bank forms, but it will have to be on my terms. Some weeks I will want to work full-time, some weeks not at all, or just a little. I plan to be gone five weeks each winter, and several weeks each summer. If I can sell your bank forms on my terms, with fair compensation for my time and results, then let’s do this.”

Without hesitation, the owner said, “Yes.” For the next 15 years, until George turned 80, he happily sold bank forms for this tiny, three person operation. He loved it, and told me to spread his story to anyone considering what he called, “extra innings, but on your terms.”

I am very lucky to have had Jack and George show me by example how to work in the form I want after age 60. Now you, too, have their stories to guide and inspire you as you piece together your future life and work. Next month I will continue this blog series with the second element of a portfolio life…learning and self-development. Until then, happy trails to you.