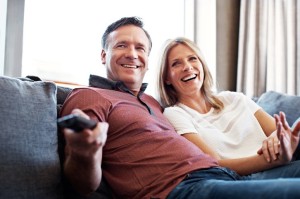 The holiday seasion is a great time to watch movies. As you consider the movies you love, have you ever thought about the formula for their storylines? What is it that holds your interest as a movie unfolds, and how might this compare to a job transition storyline?

If you are anticipating a job transition, or are in one now, this blog will reveal how the ups and downs in a movie can look and feel like what happens in a job transition. It will also offer hope and guidance for a new job in the new year ahead.

While recently taking a writing class at the Loft Literary Center in Minneapolis, the instructor told us that there is a storyline formula in many novels, plays and movies that resembles a W. A great story rarely has a straight plot line. That is just not realistic, nor is it interesting.

Consider your favorite stories. Typically the main characters begin a journey because something fundamental in their lives has changed. There is usually a downward emotional struggle early in the story that serves as a catalist for change. This is followed by a departure from the current reality, some early trumphs, and then another shift that often goes even more deeply downward than the first drop. Finally, there is a second bottoming out, then an ultimate triumph, with the main characters changed in some fundamental ways.

An example of this classic storyline is the movie Titanic. Early on, Rose is seen at the back of the ship, ready to jump overboard to end her life. She does not want to be the kept woman of a very controlling and unpleasant man. The story turns upward as she is prevented from leaping to her death by Jack.

Rose and Jack fall in love and the storyline moves sharply upward. When the ship strikes an iceberg, the story takes a deep drop that ends with Jack’s death. Rose has been fundamentally changed by what she has learned during her time with Jack. She becomes her own person, and rises up from her loss of Jack. In the end, as an old woman, her life is revealed as a triumph that completes her “W” journey.

The first drop in a job transition

The initial catalyst for a job change usually comes with a purpose. Psychiatrist M. Scott Peck says, “The truth is that our finest moments are most likely to occur when we are feeling deeply uncomfortable, unhappy, or unfulfilled. For it is only in such moments, propelled by our discomfort, that we are likely to step out of our ruts and start searching for different ways or truer answers.”

Preceeding the departure from a job, there is almost always a loss of faith in a positive, sustainable future with the organization. This negative drop comes either quickly or gradually. Most of us can sense when the bottom is near, and it is time to let go and move on. For some, this departure takes longer than they want it to. For others, it comes much too quickly.

For those who stay too long, it can feel like swinging on a trapeze bar. There is a move toward change, then away from it, then this process repeats over and over again. After finally letting go, or being pulled from that trapeze bar, there is liberation from the job and the company. At this point, the movement upward can begin.

Self assessment, market research, focus and networking take someone who has entered a job transition to new people and places that represent new possibilities. Take a look at the graphic below and you’ll see the steps. Each new platform represents the next element of a logical progression, whether transitioning to the next job by climbing up, or bridging, to what is next. 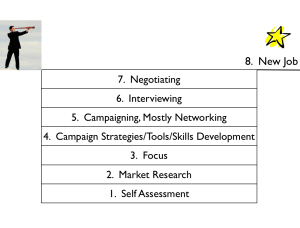 The graphic above is taken from my April, 2015 blog that reveals how one “bridges” to a new job by tossing down “mattresses” from above when searching while employed. When unemployed, however, one jumps or is pushed down closer to the bottom left side of this model. From this position, the task is to build and climb each of the eight steps from the bottom up.

There are three common ways to take a fall while building your steps from below or piling up a foundation from above. Over the past 28 years as a career coach, the most dramatic falls have occurred after a client has put too much energy and time into one opportunity, then he or she doesn’t get the offer.

The pipeline of other connections and opportunities doesn’t get filled during a hyper focus on one opportunity, and it is very hard to get the networking flywheel started again if you aren’t the one chosen for a job you thought was yours.

A second common cause for a fall is to withdraw, stop networking, and hope that jobs will emerge from the internet, recruiters, or by themselves. A third common drop is caused by repeatedly making mistakes during a job campaign, and failing to reach out for corrective advice from friends, colleagues, or trusted advisors.

Usually the bounce off the second bottom comes through a shift in mindset, increased effort, and through adjustments made via the feedback and support from others. After recovering from being a finalist and not getting the offer, one needs to get back to the basics. After a dry period that likely included a retreat from networking and an overreliance on internet research and recruiters, one needs to reset goals and get out and make multiple daily connections.

If it is commonly understood that 65 to 80% of jobs are found through networking, why not spend 65 to 80% of your job campaign time networking? Reset yourself, and reengage your network after a drop in your activity level.

While you are networking, set a goal for your number of connections each day. Ask each network connection for visibility, information, advice and referrals, and while you are at it, ask for honest feedback from those you trust most. Debrief what you are doing in your job campaign and interviews, then listen to what your advisors suggest you could alter, and what you should continue.

Don’t let yourself get isolated or default to the internet or recruiters. Again, always remember that if most jobs are linked to your network, spend most of your job campaign time networking.

I tell my clients that successful job transitions require structure, support, resilience and courage. Each client needs a daily regemin of activity that is structured in a way that works for them, and is considered a best practice. I also remind my clients that they need regular support from others who care about them and can help guide them. Isolation can take any of us on a long downward spiral if we are not careful.

We also need resilience and courage to reach out beyond our comfort zone and continually broaden our network. We need to be willing to try a third or forth time if our calls or emails aren’t returned. We can’t give up the daily job campaign regimen, even if we think we are the sure bet for a job, or that we need an extended sabbatical from all this hard work.

Life during a job transition can look and feel just like a movie storyline, taking the shape of a “W”. Try to remember that what at first goes down will eventually come up, then likely go down again, but then ultimately turn upwards.

Try not to get too discouraged if your mood or activity level takes a serious drop as your job campaign goes on. Harvard professor Rosabeth Moss Kantor once said, “Everything can look like a failure in the middle.” Hang in there, and with structure, support, resilience and courage, the letter just past the middle of your job transition “W” will be a “V”. That is the beginning of the word victory.