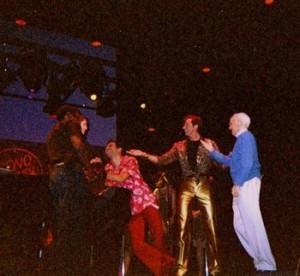 I’ll get to that Hugh Jackman (in gold) /George Dow Sr. (blue sweater) photo above in a minute. Let me set the stage first.

I emphasize versatility when speaking with my career transition clients. In three separate conversations last week, here is what I said: “Could you network in such a way that you’ll be described as both interested and interesting? When discussing your leadership skills, could you describe yourself as both a builder and a driver? In a small company job interview, could you demonstrate how you have been effective both strategically and tactically in recent years?” In each of these conversations, I challenged my clients to amplify their versatility. In this post I will be focusing on how to be both interested and interesting when networking. Be patient, I’ll get to that Hugh Jackman story soon.

Let’s start by looking at the networking process. As you likely already know, networking is the most critical element of a job campaign. It is where most opportunities are found. When it comes to structuring a networking meeting, I recommend the book, The 20-Minute Networking Meeting, by Marcia Ballinger and Nathan Perez. For a summary of their recommendations, read my August, 2013 blog. Manage the process as the book suggests, but always be ready to depart from the “script” when you get the opportunity to stretch the meeting.

Many networking conversations last one to two hours. When you find yourself with this much extra time, I suggest you still use the 20 minute structure. As the longer networking conversation unfolds, balance your own needs with the needs and preferences of the other person. What is their story? What do they care about? What can they teach you? How do their interests and stories intersect with yours? Which of your stories might interest them? What can you teach them? How can you help them?

Show your sincere interest. Listen deeply, reflecting back key points, but don’t let yourself become just a sponge and a mirror. If you do, in the end they’ll perhaps know themselves better, but won’t know you. If you want to be memorable, share more about yourself, and some of your more interesting stories. Share some things that will make them smile, laugh, emotionally connect with you, lean forward and ask for more. Remember that interesting is in the eye of the beholder, so stay mostly with common interests, but from time to time take them down a different path. Get a little creative. Be memorable. Your stories don’t need to be dramatic, but steer clear of the dull, predictable, transactional or forgettable conversation.

Now let me tell you about that photo at the top of this post. It was taken eleven years ago on my father’s 85th birthday. He was invited to leave his front row seat and join Hugh Jackman on a Broadway stage. At the time, Jackman was starring in a musical called The Boy From Oz, and was starting to engage the audience in some very adventurous ways. This is definitely one of my most interesting stories, and reveals my father at age 85 dancing, singing and receiving a standing ovation on Broadway! My sister Liz wrote all about it last month in a Huffington Post blog
Take a look. It is sure to make you smile. Telling that story has made for many interesting networking conversations for me and for my sister. It always gets a smile and strengthens my relationship with anyone I tell it to.

What are your interesting stories? Could you slip one or two into an upcoming networking conversation? Won’t it be great, if at the end of your next networking meeting, the other person is thinking or saying, “I appreciate your keen interest in what I have had to say, and I must also say that I find your stories and comments have been interesting and very helpful in getting to know you better. Let’s continue this conversation in the future. Let me see what I can do for you.”

Interested and interesting. Make this a goal for your next networking conversation. Have some fun with it! Keep your “sponge and mirror” in good working order, and throw in your own little song and dance while you’re at it!