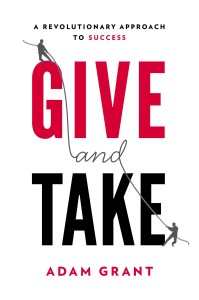 At this time of year we enter a season of generosity and thanksgiving. According to Wharton economist Adam Grant, being a giver throughout the year leads to greater success in life and work. There is, however, one important disclaimer. If we are givers, but don’t take care of our own needs along the way, we become failed givers. This is a key message in Adam Grant’s book, Give and Take. Here are selected highlights from a review of this book by Kevin Currie, a top rated Amazon book reviewer:

Here’s the counter-intuitive part. If we look at the most successful people – the happiest, the most likely to be promoted, etc – they are generally givers, and if we look at the least successful, they too often tend to be givers. (Takers do moderately well, but over time, few want to deal with them. Matchers do okay too.)

This book is an attempt to explain why being a giver is a good ‘strategy’ for success, as well as under what conditions giving is a failing ‘strategy.’ First, the positive: simply put, people appreciate givers and giving often makes people want to give back. Since givers help others and often put others’ needs as a priority, givers often garner (without deliberately trying – AND THAT IS KEY!) a network of support from others they’ve helped.

Want to communicate most effectively? Ask more questions to others than you give answers, ask for advice, and be aware of how you can help others. Want to bring out the best in people around you? Believe in them by recognizing and appreciating their strengths and contributions. Want to be successful? Don’t think of personal relations as zero-sum games (where others can only win to the degree you lose), but positive sum games (if you win, it doesn’t mean that I lose, but we can all win together.)

It sounds obvious, right? But it isn’t. Even when we may be givers in our personal lives, we often become matchers or takers at work. Even if the success of a giving strategy seems intuitive, it is equally intuitive that getting ahead requires receiving as much as, or more than, you give, spending most of your time working on things that will obviously benefit you, and not spending more time assisting others at work than getting your own stuff done. But Grant cites a growing body of research showing that giving – under the right conditions – really is the best overall ‘strategy.’

Of course, I said “under the right conditions.” What are those conditions? Well, for starters, one must give with some sort of purpose. Those who don’t see some sort of result from their giving often burn out. (So, fundraising telemarketers burn out less when they can talk with those who their efforts have helped, and teachers burn out less when they see what their more successful students go on to do.)

Also, one must give to others and things that the giver is interested in. (Volunteering for projects and to help people I care about is much easier and fun than for those I care little about.) Lastly, one must watch out not to be exploited by takers, who can often seem like givers in their agreeableness, but are exploitative in the end. (And Grant gives some good advice on how to detect real givers versus takers who are good actors.)

So, all of this is what Grant calls ‘otherish giving.’ Giving selflessly versus giving a bit selfishly is, Grant writes, what ultimately separates successful from unsuccessful givers. Give, but make sure one is giving with a sense of purpose, and to people and things one cares about. Give, but not when it comes AT THE EXPENSE of one’s own projects.

I did gain a lot from this book. Not only have I found myself monitoring some of my interpersonal dealings by the advice given in this book, but it has given me insights into what working styles many of my colleagues have (which affects how I deal with them.) Very good book that not only conveys some very interesting research, but should be able to give people some good and usable advice.”

My sincere thanks to Kevin Currie for this excellent review of Adam Grant’s book, Give and Take. I frequently recommend Grant’s teachings in my coaching practice, especially his advice to lead with generosity and self-protection by being otherish. May you give and receive in abundance this holiday season and throughout the coming year.